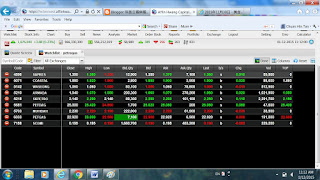 Many friends and acquaintances frequently ask me how I made so much money from the stock market. I have been using this golden rule for share selection:

The company must be able to make more money this year than last year by looking at its profit for the last few quarters and provided it is still selling at a reasonable P/E ratio. For most cases I consider P/E 10 is cheap enough or acceptable. But for leaders of the industries, I am willing to buy at a higher P/E ratio.

Many readers frequently complain that I only recommend shares when they have already gone up in price and I wanted to sell so that they can buy. As you know I have been recommending Latitude, Lii Hen and VS for a long time when their prices were much lower but all my critics did not buy. Those who have bought are laughing to the bank.

Now the prices of Latitude, Lii Hen and VS have all gone up a few 100% within 1 or 2 years, nevertheless, they still comply with my golden rule. I believe their prices will continue to climb. You can verify what I said above by looking at their EPS for the last few quarters in Bursa Malaysia.

On the last trading day 28th Nov. 2015, both Latitude and MPI reported about 29 sen per share and both their share prices went up about 30 sen each.

If you are not a novice, you should use margin finance to leverage your profit. As long as you are confident to make more than the 4.8% pa interest rate, you can make more money with margin finance.

I hope some readers will find some new shares which comply with my golden rule and post their findings here for the benefit of all readers.

My intention of posting this article is to teach people how to make more money from the stock market. Unfortunately, there are a few habitual critics who want readers to think that they are clever in making stupid comments. They must realise that most readers can see how stupid they really are and appreciate my writings.

As I have a lot of the shares I mentioned above, I am not asking you to buy any of them but if you decide to buy, you are doing it at your own risk.
Posted by CH Tan at 4:16 下午 没有评论:

How can I make so much money from the stock market? Koon Yew Yin

How can I make so much money from the stock market? Koon Yew Yin

After I read investment books by Warren Buffet, Benjamin Graham, Peter Lynch and other investment gurus and with my 32 years of experience, I have formulated a simple way to select shares that I am sure of making money. I cannot lose money if I buy shares following my simple golden rule.

I am only willing to buy the share if it is selling at a P/E of less than 10. I may buy it at a higher P/E if the company is the famous or leader of its industrial group and many financial institutions are holding the share.

There are many share selection criteria such as NTA, Cash flow, return of equity etc. I consider the earning per share (EPS) is the most important. It is the most powerful catalyst to move share price. When its EPS goes up the share price will also go up.

For a start, you must think like a businessman. Since the value of our Ringgit is dropping, I want to find export manufacturers that sell their products in US$. I do not think like an accountant, worrying about cash flow, too much borrowing etc. As a businessman, I know you need more loan to do more business and it takes time to manufacture the products and it takes time to deliver the products.

Moreover, most buyers will not pay cash. They want delay payment of 60-90 days. As a result, the company account will show increased borrowing and poor cash flow.

NOTE: Readers must check all their holdings to make sure that the companies can make more profit this year than last year.


More Sharing Services|Share on facebookShare on twitterShare on myspaceShare on google
Posted by CH Tan at 12:55 下午 没有评论:

Time to invest in individual stocks that perform well

Time to invest in individual stocks that perform well

By: YAP LENG KUEN
WITH the stock markets generally on a downtrend, it may be timely to look at individual stocks that have shown consistent performance on their own.
“These are stocks that are not moving in line with the market. They are individual stocks whose returns do not depend on the market direction,’’ said Pong Teng Siew, head of research, Inter-Pacific Securities.
With a recent “buy” call on Luxchem, he said the stock’s risk profile had been steady, with a tendency to not track the market trend.
As for Teo Seng, Pong said it had strong returns on shareholders’ funds while experiencing good demand for eggs for which prices were climbing.
Kossan was another consistent performer, Pong said, while Hartalega could be considered a long term stock.
Vincent Khoo, head of research, UOB Kay Hian, is looking at plantation stocks with IOI Corp being his top pick. Even though IOI Corp is trading at above 100 times price earnings (PE) ratio, Khoo maintains that historical PE is irrelevant; one has to look forward to better earnings from IOI Corp based on optimism over crude palm oil (CPO) prices as well the company’s potential re-entry into the syariah list.
After making a loss in the third quarter of financial year (FY) 2015, IOI Corp registered a profit of RM155.7mil for the fourth quarter of FY 2015.
How long will this plantation stock wave last? The El Nino spell that brings about substantial dry weather may possibly last six months, according to an analyst.
Besides the El Nino factor boosting palm oil prices, revenue from sale of CPO, denominated in US dollars, will be good as long as the value of the ringgit is falling faster than the US dollar value of competing oils, according to Pong.
Some recommend a mixed portfolio with markets at current levels.
This could comprise some dividend stocks and some with potential upside such as utilities, plantations and construction, said Chris Eng, head of research, Etiqa Insurance & Takaful.
Eng still sees some newsflow in construction, some strength in CPO prices while utilities remains oversold.
There may be some stocks that are relatively more stable than others although in general, stocks are not spared from the recent volatility due to sentiment and liquidity issues, according to Danny Wong, CEO, Areca Capital. These more stable stocks include REITS, port operators, special purpose acquisition companies (SPACs), companies in healthcare, pharmaceuticals and non-consumer sectors.
Currently, there are only oil- and gas-related SPACs listed on Bursa Malaysia; these are cash rich Cliq Energy and Reach Energy.
Non-consumer sectors deal with companies producing basic necessities such as Nestle and Dutch Lady.
On top of that, the thematic performers for the year are glove, electrical and electronic as well as technology companies, said Wong.
Prices of completed non-landed private homes in Singapore fell 0.6% in August this year over July, said the Singapore Business Times (SBT), quoting the National University of Singapore flash estimate for its overall Singapore residential price Index.
This was after the index dipped 0.2% month-on-month in July, based on the revised index value for that month.
BNP Paribas expects Singapore’s housing market to shift towards oversupply from 2016, with prices bottoming out in 2018/19 due to record high supply, tight immigration policies and rising interest rates that dampen demand, said the SBT.
The excess supply could build up and peak in 2020, before easing, analyst Chong Kang Ho was quoted as saying of the base case scenario.
The fact that Hong Kong home prices are the highest relative to shares of the city’s publicly-traded developers in almost two decades is a sign that the property market is about to drop as much as 20%, according to Bloomberg, quoting Bocom International Holdings Co analyst Alfred Lau.
The Hang Seng Properties Index slumped 15% this quarter, even as a gauge of Hong Kong housing prices compiled by Centaline Property Agency Ltd rose to a record.
The stock gauge was at the lowest compared with the real estate measure since 1998, when the city’s last property bubble was bursting, said Bloomberg.
“We’re just at the beginning of the correction cycle for physical property prices,” Lau was quoted as saying. “We expect a 10 to 20% decline in prices. Shares are already pricing in a 10 to 15% decline.”
The number of property transactions in Hong Kong tumbled 37% from a year earlier amid concern about China’s economic outlook and the prospect of higher borrowing costs as the Federal Reserve prepares to raise interest rates.
Analysts, including JPMorgan Chase & Co’s Cusson Leung and Morgan Stanley’s Praveen K Choudhary, are calling for Hong Kong property prices to slide as much as 10% next year, according to Bloomberg.
In Malaysia, secondary house prices have taken quite a beating, down by 50% in isolated cases, said Pong of Inter-Pacific Securities.
“There is also a big slide in transaction volumes in the Kuala Lumpur and Petaling Jaya areas,’’ said Pong. Generally, the outlook for the Malaysian property sector has turned somewhat sour, with cuts in sales targets, delays in new launches, and rescission of land deals among local developers becoming the order of the day, reported StarBiz.
Columnist Yap Leng Kuen looks forward to more affordable homes.
Posted by CH Tan at 9:24 下午 没有评论: